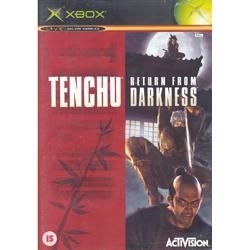 Set in the late 1570's, one year after the original Tenchu, Tenchu: Return from Darkness allows players to assume the role of the ninjas Rikimaru, Ayame or the mysterious Tesshu as they battle the evil Tenrai and his six lords of darkness.

As silent assassins, players must use cunning, strategy, deadly stealth and an arsenal of weapons to overcome dangerous missions and defend the Japanese countryside from Tenrai's armies.

There are currently no reviews for this product