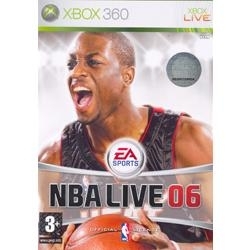 Feel the emotion and intensity of the most authentic pro basketball experience in NBA Live 06. With a completely enhanced transition game, take the point and deliver fast break passes on the fly as a teammate runs the lane, awaiting your pass. On defense, get inside and feel what it's like to block a dunk-or to be dunked on-as big bodies collide under the basket. Will you live in the paint or set up camp outside the arc? The choice is yours.

Become an NBA superstar with the all-new EA SPORTS™ Freestyle Superstars. Dictate the actions of top NBA stars with moves just like their real-life NBA counterparts. The sport of basketball is elevated to a completely new level with NBA Live 06.

- Physical Play: An improved transition game and a more physical brand of play result in superstar collisions and dunked-on scenarios.

- EA SPORTS Online: Take your game online with Xbox Live® and throw down against opponents from across North America.

There are currently no reviews for this product